Ah thought, on the Ninety Eighth  anniversary of his birth, ah wid write a wee bit aboot ma Faither, Scud. Ma earliest memory of him is of gettin’ a good night kiss from him when ah was a wee boy and his stubbly face against ma face. Auld Bunt was in Hospital, ah, think, or she might’ve been away fae the hoose at the time. When ma dad died ah found a letter that Bunty had sent him when ah was aboot Three or Four askin’ tae come back, so it might’ve been around then. Another memory of Scud is when ah had a pee next tae him and noticed that he had hairs on his willie and ah didny. Widny have minded sae much but ah was Twenty One at the time. Another memory is of bein’ separated fae him for the first time- at a Pumphy Juniors match. Ah freaked oot because ah couldny find ma faither and for what was probably only Seconds ah was a distressed wee boy. Then oot the Blue ah saw the happy, cheery face of Chappie, ma Dads  cousin and best pal callin’ oot ‘got him Scud’. There were plenty of occassions efter that in the future where ma faither never forgave Chappie for findin’ me, but that’s for another time. In the late Sixties or early Seventies he had a Ford Consul and he was always takin’ Davy and and I and aboot Five or six pals doon tae the River Almond or the Murieston Water tae guddle for Fish or build rafts – honestly, Three decent sized logs and some rope and he turned intae Scud Hyerdahl. He used tae take Davy and I and Ben the Dug up tae the wids that are noo Knighsridge and Ladywell and climb the Chestnut Trees and shake F–k oot the branches so that the ‘Chessies’ wid aw fa’ doon. He wid get Davy and I Train sets and Skalextric and Air rifles and rubber Dinghys- because he wanted a shot of them tae. He was good on the Dinghy, though, like a Duck tae water, unlike Davy an I who were really good at goin’ roond in circles. That wid’ve been his Navy Genes. He was on a Minesweeper durin’ the Second World War[ a Telegraphist- dot dash, doo, aw that] and ended up at ‘Flowerdown- the cousin of Bletchley park, where they decoded aw that German stuff. He was demobbed Six Months after the war ended on account of havin tae copy Russian morse code at the beginnin’ of the cold war. He did tell me that he sat beside a woman who, whenever she had her period everybody at Flowerdown[and Moscow] knew aboot it. He also told me a great story about a Woman who he met up wi’ on shore leave at Portsmouth. He told me they’d have a cuppy Tea, then go away for a shag and no’ really say much to each other. Ah remember thinkin’ at the time ‘How good is that?. Anyway he never told me any of the really dirty stuff but he did tell Matt Laird and Davy Kane. So, ye’ll have tae ask them. Ah also remember the first time he caught me in ma bed wi’ a Lassie. Ah was a bit drunk, she was a bit drunk, and her pal was conked oot on the flair, drunk. Anyway, auld Scud came back fae the Bowly mare pished than us aw pit thegither and as ah was under the covers wi’ the lassie he stuck hs heid in the room, put the light on and said ‘Jesus Christ, it’s awrite for some. Ah think he was just relieved that ah wisny gay because back then ah was Shite when it came tae women. Another time ah remember quite vividly was when he came back and told me that he’d just got his’ Nat King Cole’ wi a younger woman. Bunty was away at time for the Tenth time. ,,,,,, Ah remember gettin’ older and oor relatioship sort of deteriorated. The sad thing was that we were gettin’ on great not long before he died [ he might’ve known that he was dyin’ but ah certainly didny]. Then there was that horrible day in January when he was buried. More Tomorrow. 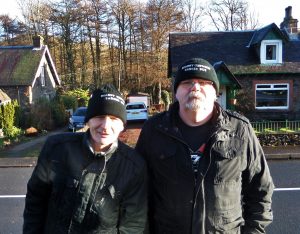