This is the anniversary of Scud seniors funeral which I mentioned the other day. Winter’s shite. I bought some wine -I’ve still got a birthday card from Chris, which has a quote by Louis Pasteur on the front which says -‘There is more philosophy in a bottle of wine than all the books in the world’ -and I thought ‘F–k it -I’ll get a couple of bottles of wine and get really philosophical. After half a glass I just didn’t fancy any more – I had more than enough on Thursday and probably shouldn’t be drinking as much as I have been over the last Six weeks. I’ve still got a birthday card from Linda which says on the front ‘Where there’s Tea there’s hope – that’ll be the road I’m going down tonight. With not smoking [ for Three Months now ] and curtailing the awfy drug habit that I had before the cancer I feel as though some kind of buzz keeps me from going mad but drink’s not the way – I really miss a joint but don’t fancy the tobacco and am happy to be a non smoker. How ironic that now that I don’t smoke, my vascular system is like a chimney that was in use every day for Forty years and never swept. I would think that pure grass going into my lungs and blood stream would be as harmful as tobacco. Still, I can  have some Rastafarian Tetley and that seems to do the job. If the doctor told me to stop the Tea, I would – I’ll find out on Tuesday. It’s funny – but I’m eating more than I have done for a while. I had two slices of toast this morning and a big hearty dinner – mince and tatties [ with Carrots, mushrooms and kidney beans in the mince ] and Brussel sprouts.  I also had Three grated carrots and Three cherry Tomatoes -and I’ve not had my supper yet. I am Two stone heavier than I was last March when I moved into the flat – and I look and feel terrible. I think the last year has taken an awful toll on me- physically and mentally. The Lymphoma was nothing -the Heart attack and finding out about the state of my arteries knocked the wind out my sails. If the hospital and Doctors were to tell me that I’d need more chemo for the next year, I’d think ‘aye, fine, gies it and it wouldn’t be a problem. I cant afford to have any more arterial damage – I’m one dodgy artery away from a stroke – from the hips up my arteries are in an awfy state- from the hips down, they’re not much better. 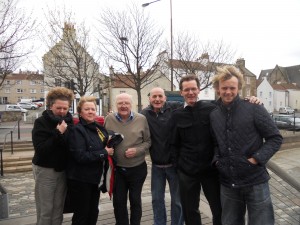 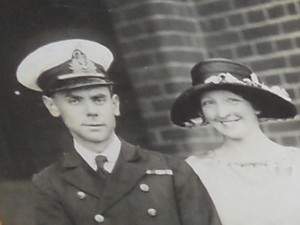 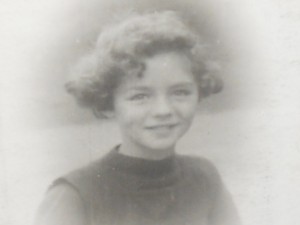 I’ve been thinking a lot lately about my dad and mum and immortality. Today is the 31st anniversary of his death and I can still remember it all quite vividly- why do people have to die in the bleak mid winter ?. I’ll never forget my uncle Allan’s funeral – it was on a beautiful May morning- that’s when people should die and get buried- in summer. The people who were there will remember it as a great day – a celebration of a life lived rather than a mourning of a life passed. My dad’s was horrible – a bleak, horrible winters day- Bunty wearing a dress that would have been more at home at a party in Ibiza in July than a funeral in Mid Calder in January. I remember thinking, leaving the house, ‘this is just the beginning- it can only get worse’ and , by Fuck, I was right. Seeing someone else’s coffin going into the plot where your father should be going isn’t very nice. I have never, in the past or, do now, in the present, or ever will, in the future, believe in God or Heaven or the resurrection- one of the reasons being that if Scud senior had known that someone with a very Irish Catholic surname was dropped into his plot instead of him he would’ve kicked up the awfyest fuck with God. In my book collection I have a history of Celtic, a Jock Stein biography, a Jimmy Johnstone [ who is the closest Celtic or any club or Country have had to God ] biography, a Michael Collins biography, a history of Catholicism and a history of Ireland. I also have a Crucifix and Rosary Beads which were blessed at Lourdes and given to me by a wonderful human being who is a practising Catholic. If Scud senior, or Auld, Auld Scud knew I had any of that in my house they would be floating down from heaven every night haunting the shit out of me – but they don’t – that’s why I know all that afterlife stuff is just shite and nonsense. I think that the bottom line was my dad never hated Catholics – he just hated the Catholic who was shaggin’ Bunty behind his back, until he found out and battered him. He was a crabbit, selfish auld C–t and I thought I hated him – but I didny – he just pissed me off a lot of the time. Linda was his ally, Chris and Davy intimidated him because they could tell him how it was – they could see the big picture – I couldn’t -maybe he was the same because all we ever did was shout and swear at each other- Chris and Davy could hurt him with words and truth that Mike Tyson or Rocky Marciano couldn’t have hurt him with a punch. I remember Bunty telling me that they were discussing his not being here One day – he told her that he wouldn’t worry about Linda because she was sorted with Nick and everything would be fine -he got that right – rave on Andrew Maltman. You would’ve got all the love and affection that Chris, Davy and I should’ve got but I genuinely believe that if Scud senior had lived to see wee Malty the family would’ve changed in a positive way. Anyway, getting back to what he told Bunty – he said that he never worried about Chris or Dave because he knew that they would be fine but he said ‘ what’s ‘that laddie’ gaunny dae when I’m no’ here’. I love him for saying that and I know where he was coming from and Auld Bunt told him not to worry because everyone has their own survival kit. Whether that put his mind at ease or not I’ll never know but what I know is that there’s been an awfy void in my life for the past 31 years’. I could go on forever about when he was a knob – but I think Scud and Bunty- thanks for producing Linda, Chris and Davy B – who at various stages of my life have made me aware of Jimmy Page, James Taylor, Steely Dan, Genesis, Bob Dylan, Bob Seeger, Love, Horse, Heart, Nanci Griffiths, Lily, laughing Lady, and Santana. What a dull, dull world it would’ve been without Carlos and Man Utd . The photos are of my Granny and Granda Broon in their late 70’s, my Granny and Granda Jenkinson in the 20’s on their wedding day, My uncle Allans farewell treat and Bunty, when she was wee – whatever looks we got, that’s where they came from.

After surviving what was, health wise, the worst year of my life we’re not even over January and I’m thinking ‘F–k sake is it worth even planning ahead for this year. I’ve finished my chemo and will know next month how that has gone after a CT scan- hopefully I’ll get the all clear but I don’t feel much better than I did before my diagnosis. I will continue with all the heart and blood medicine until I die but the letter I got today made me wonder if that will be months or years. Three of the Four main arteries that supply blood to the brain are blocked and are beyond medicine – great news. Tomorrow will be Thirty One years since auld Scud, my dad, died Ten days after his 62nd birthday – I bet if I dug him up tomorrow he’d be healthier than me.

It’s always sad when someone dies – and David Bowie was no different. What I did find a bit mad, though, was the amount of news coverage his death was given. To me, the bottom line seemed to be that he led the way for men to wear make up and not get a hard time over it. The news reports cited the people he’d influenced- Kiss, Gary Numan, Duran Duran, Midge Ure and I thought, ‘wow -that’s a who’s who of musical giants’. When all is said and done he was just a singer. He never eradicated world poverty or discovered a cure for cancer. Two months ago a team of Doctors and Para medics saved my life – they probably did the same for someone else the night before and the following night and will continue to do so and stay off the Radar while they’re doing it. As for the Lady Di syndrome where there is this outpouring of grief for a non relative – I will never understand what that is all about. I suspect that it’s people who have had a mental block when it comes to real grief and use a celebrity as a substitute. 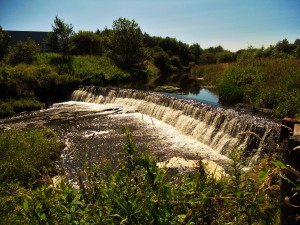 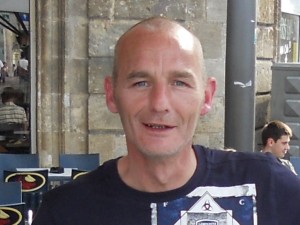 After today I only have Two more rounds of chemo therapy left and, hopefully, that will be that. I will need a scan in February to determine whether or not I’ll need more chemo but with a bit of luck I should be cancer free and ready to get back to ‘normal’. Normality means my hair growing back in, being strong enough and fit enough to go for a decent walk or cycle, and to ‘get busy living’. 2016 will hopefully see a continuation of me not smoking – big Callum told me last week that the First Eight years are the worst and I’ve now gone Eleven weeks without a roll up, fag or joint. I’ve not achieved much in my life but I consider stopping smoking a huge thing and it is mind over matter. I miss rolling and smoking a Rastafarian old Holburn, though, but I can still have a Rastafarian cup of tea. The plan is to give that up soon. I’d love to be in Paris for the Euro 16 Football tournament with Davy B, Thirty Two years after we were there for Euro 84. I’ve still got my ticket for the opening match of that tournament and smoking the Bob Hope wont get me there- or Bordeaux. Well, that’s me until the next time- I’m off to listen to some Melanie and Nolwenn Leroy.

Pumphy is still recovering from the shock death of one of it’s favourite sons – the renowned spaghetti western music composer Enniold Macaroni, famous for ‘Once upon a time in Bo’ness’ and ‘The good, the Cawb and the Bowly’ among others. A memorial service is planned for next week and spaghetti western legends, the diminutive wee van cleef and ‘The man wi nae money’, skint Eastwood will speak at the event. Macaroni, [ real name, Boabby Thomson] was nominated for Three Oscars but never won – although he did win the Pumpherston and district ‘Ah’d whistle that at a Bus stop’ award Five times.