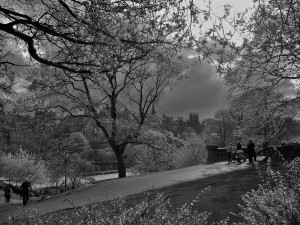 Today was rough as Fuck and ah’m glad it’s done wi’. Tae be honest, since gettin’ back tae Pumphy fae the Train journey tae Arrochar ah’ve had the Black Dug. It had been such a great day wi’  Linda and Chris and Davy- the food and drink was amazin’, the scenery was stunnin’- a jolly day was had by all. Contrast that wi’ the ‘back tae normal’ of Pumphy and what dae ah end up wi’ ?. a realization of how Shite ma normal is. Ah can hardly walk- ah’m fat- a beer belly and Dolly Parton Tits- as a result of bein’ a virtual prisoner in ma ain hoose, dizzy spells where ah get cauld awfy quick and have tae sit doon. Fuck knows what that is. For some reason ah’ve been strugglin’ tae sleep as well. Ah’ve no’ seen the wee Cat for a few days, noo. Ah’ve got tins of Cat food and a carton of Cat treats for the wee Bugger. Ah’m gaun tae chap the door of the woman in the next block, who’s Cat it is, and ask her if it’s OK. Was gettin’ fond of the wee thing and ah hope it’s no’ been knocked doon. Liz Truss as PM- what the fuck is aw that aboot?.  So, ah ended up lookin’ at the knife ah use tae shave the pollen off the lump ah’ve got – but ah thought ‘Fuck that’.  Ah couldny kill masel( well, ah am smokin- which is the same thing as suicide in a roond aboot way) wi’ violence- ah’ll day it One day wi’ the Amitriptylines and some Whisky- no’ yet, though.