Adieu L’Escure and the Magpies 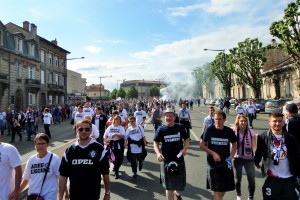 The magpies, which had been a great source of entertainment at the beginning of the Month, building their nest- making sure to vary their route to the nest every time- and cackling away at my window box getting the food I’d left them, seem to have abandoned their home. It’s a blustery day and near the top of the tall tree just outside my window I can see the nest as the top branches are being pushed and pulled by the wind – but there are no Magpies to be seen. Before I left for Bordeaux I did see a crow near the nest and I reckon he’s chased them off. A farewell of a different kind last Saturday in Bordeaux as the fans of Girondins de Bordeaux FC said ‘Adieu L’Escure’ and watched their team play and win their last match in the stadium. To say I was lucky enough to be there would be a bit of an understatement. Six of us made up the GIRONDINS D’ECOSSE – Hamo, who had been the Agent provocateur of the trip back in January, Stevie and I made up the old guard, veterans who’s third time together in the stadium this would be- we were there in 98 for the Scotland Norway world cup match and again in 2010 for the Bordeaux v Lorient league match. Hamo’s son Andrew and his pal Allan made five and last but not least was Davy Broon, my brother who Thirty years previously had been in the stadium along with me to see Marius Tresor play his farewell match for the club. Hamo pulled off the equivalent of a Giresse hat trick in a European cup final when he got T shirt felly to make the GIRONDINS D’ECOSSE T shirts. If the six of us got a Euro for every time we were asked to have a photo taken we’d still be in Bordeaux now – it was amazing. Between us all we got interviewed by newspapers, radio, made it on TV and on to the official Bordeaux FC website. The Ultra marines- the hard core fans- had organized a farewell party in the Place de la Republique and the old legends were up on stage- Marius Tresor, Allan Giresse and Patrick Battiston who all played in the match that Davy and I watched almost Thirty years ago. We just got bombarded with photo requests until the square was so full you could hardly move. After the farewell speeches and a sing song it was ‘le marche’ to the stadium. Between six and Eight Thousand fans started on the march and in no time there were bottle necks and tail backs – but everyone was in party mode and never let it become a problem. I was struggling a wee bit by now-my leg was so painful and I began to get a bit claustrophobic feeling like a sardine in a tin when we came to a building with wide steps. We managed to break free of the crowd and climbed the dozen or so steps to the top and then Davy unravelled the big YES flag -YES as in ram yer Britain up yer arse and not the 1970’s rock band. The Six GIRONDINS D’ECOSSE then stood in a line and clapped the Bordeaux fans as they marched by in their Hundreds and they reciprocated with chants of Scotland and Ecosse and they were applauding us and taking pictures and it was all quite surreal. We arrived at a bar near the stadium with no tickets and within no time Davy, like James Garner the scrounger in the great escape came back with Four – ya beauty. The atmosphere inside the stadium was fantastic. Hamo and I were in amongst the ‘ultra marines’ who rolled out the gigantic flag that covers almost everyone behind the goals – it’s quite weird being under a flag with Thousands of other people- especially when half of them seem to be smoking the Bob Hope. Davy was behind the other goals which like the rest of the stadium was a sea of flags and scarves and the carnival atmosphere continued for the ninety minutes of the match. What a day.