Well, that’s Springtime almost here and a bit of normality widny go amiss. The Chemist has blundered wi’ ma prescription- ah’ve got enough Amitriptyline tae kill masel aboot Eight times. No’ that ah’m contemplatin’ Suicide but it is an option, ah suppose. Ah’ve been takin’ them as normal but ah usually have a couple of extras when ah canny sleep. Ah’ve been almost in a state of Hibernation for the last Fortnight- Ah’ve hardly eaten and slept most of the time. Ah just weighed masel and ah’m Ten and a Half stone, which is aboot right. Still strugglin’ a wee bit wi’ the isolation and it gets tae me at times. Ah just think aboot bein’ in Hospital for Six Weeks or bein’ in a Polis cell fae a Friday night tae a Monday mornin, and that helps me get over this Shite. At least ah can get oot and get some fresh air. 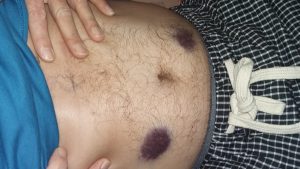