Ah love the WWW, Pusbook, Spotify, free Sudoku , Youtube -you name it it’s aw there, auld Fitba matches, Platini, Maradonna and pele et al, at the touch of a button.  At this point ah’d like to give a mention to Et al, who doesny get enough recognition.He, she [ ‘it’, these Days], seems to pop up everywhere, sport – Best, Law,Charlton et al – Politics, Hitler, Stalin Thatcher et al – Gangsters, Dion o Bannion, Santos Trafficante, et Al Capone. Ye wid have to achieve something in life wi a name like ‘Santos Trafficante’- that is a name and a Half. Ah always said tae masel that if ah ever got a Brazilian Jock Russell Dug, or a Jock Russell fae a Gangster, ah wid call it Santos. Ah was driftin’ away fae ma original topic which was the Internet. Ah go on the Pusbook quite a lot and it’s full of ads aboot this, that and the next thing and most of them are beyond a Joke. It’s suddenly become eerily dark[6.45pm-Saturday evening] and it’s just reminded me aboot last night. Ah’m sure ah was woken up by heavy Thunder last night, 10pm-ish. Anyway, the Pusbook ads are, like ah said, beyond a joke. Ah don’t know who the Dating sites are aimed at but the Female models they have in them certainly dinny look like they wid have any trouble getting’ a date wi’ a Man, Woman, Bi, Gay, Lesbian, Trans Gender or anyone of the Three Hundred and Seventy Four other variations that ah canny even remember, noo. Unless they’ve got a Lion doon their Knickers tae specifically scare suitors off, these Women wid have nae bother gettin’ a date. Ah’ve never reached that stage where ah felt lonely enough to go on One of these sights and ah’d probably be a prime example of the people who do  frequent the things. Sometimes on the auld Pusbook, ye’ll see the wee Blue Thumb appear beside somebody’s name, meanin’ that they ‘Like’ the site and when ah see the name beside the ‘Like’, ah’m thinkin’, aye, makes sense. They never look anything like the models in the ads. It’s been, for me, a disturbingly long time since ah got ma Nat King Cole, but ah’ve never thought, Oh aye, ah’ll try that. They wid be better calling them names like, for Him, ‘Turn up at ma Door wi yer Tits oot’ or , for Her, ‘Turn up at ma Door wi’ a hardon’. Ah was always a Norman Wisdomy, shy, bashful type when it came to the opposite Sex[ sounds like  who the ‘Famous Five wid’ve been up against at the Fitba’]  until such times as ah got tae the ‘ Here we go, ah’m gettin’ a shag’ moment and ah instantly became ‘Buddy’, as opposed tae the Nutty Professor. If ah was standin’ at a Bus stop beside Joanna Lumley or Madonna ah widny say a word if ah was sober. If, on the other Hand, ah had the right amount of Alcohol, ah’d be thinkin’ ah wis in there wi’ a chance. If ah was sober and an attractive lookin’ Woman started talkin tae me ah’d automatically think she was either doin’ it for a bet or she was a Bunny Boilin’ Psycho who wanted tae take her revenge oot on the poor C–t who just happened tae look a bit like her cheatin’ Husband. What ah’m gettin’ at is that it’s quite sad that people feel the need tae try one of these sights in the First place. That’s the Polis at they noisy wee Bastards next door. Time for a Ratafarian Old Holborn. 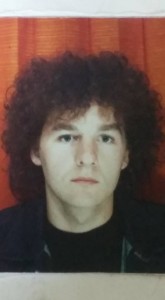