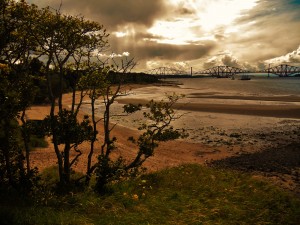 Ah’m noo the heaviest ah’ve ever been, over Eleven Sone, and it’s Crisps and Biscuits that are to blame. Over the course of the last Month ah’ve had aboot Half a Dozen proper cooked meals. Ah canny be bothered wi’ preparin’ meals. Ah always end up wi’ a Hundred dishes that ah canny be bothered wi washin’. Ah have a bowl of Alpen every Day wi’ a chopped up Apple or pear, or both in it- Ah Half the Fruit and chop up some and throw it in. Ah eat the Two Halves that are left. Ah find  that’s enough for the days food preparation, Ah’ll get a few Biscuits durin’ the Day – Linda Broon got me a Hawick goody bag and there were Ginger Nuts among the goodies. Ah’ve no had Ginger Nuts for ages [ ah get Tablets] and ah’d forgotten how guid they were. Ah consider Four slices of Breed and a Packet of Crisps a meal. Ah waste a lot of food and ah’m Shite at judgin’ amounts and that’s where the waste comes fae. Ah’m no’ very keen on re heatin’ stuff from earlier or freezin’ stuff, so, what’s left goes in the Bin. And ah do feel bad aboot the waste – there are loads of starvin’ folk in the World and ah wish ah could help – Alpen and an Apple and pear save on the waste………. Ah was thinkin’ earlier on about Pumpherstons place in History and culture. Films like, ‘Raiders of the Top Park’ ‘Bridge on the Hairy Tip’ Mutimy at the Bowly’, books like The Goon and Sixpence,  based on the true story of the local Mechanic who died in mysterious circumstances after lowering his price for sortin’ a Bike engine.  Famous musicals like Bingin’ in the rain. More of these and other Pumphy might appear after a Rastafarian Old Holborn.