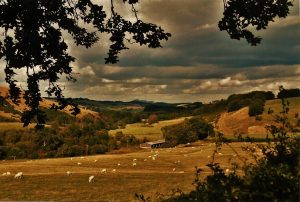 Andrew, young Malty, is coming up from the Big H [ Hawick] to put my new door up,  tomorrow. Canny wait, it’s Six Months since the Polis/Fire Brigade broke ma auld door doon and livin’ next door tae those F–in’ Baw Bags next door these last Four Months has been a nightmare. Ah say Baw Bags but ah think the Flat is occupied by Four young lassies, with a couple of laddies who just appear oot the Blue, noo and again tae shout through the letterbox for Twenty minutes then start fightin’ each other ootside. Honestly, they make Sugar Ray Robinson and Jake Lamotta look as if they avoided each other like the Plague.  The Polis thought ah was deid.  Ah’d had the ‘Black Dug’ keepin’ me company for a few Days and ah wisny answerin’ the phone or the Door and the family thought ah might be deid and phoned the Polis. Ah’d just got ma new medication fae Boots and thought, ah’ll take a Double dose the First time and see how the wind blows.’ Well, it was quite breezy, ah can tell ye that much. Ah’ve been takin’ pills and pain killers for so long noo that ah think ah might’ve got some tolerance toward them. The night before the Polis came ah took Three Amitriptylines and Three prozacs –  no’ aw at once, mind you – no’ far off though. So,  unsurprisingly, ah slept like Rip van Fuckin Winkle’. Ah wakened tae the sound of the Door bein’ battered and thought ‘What the F–k’s happening ?. Then ah did what ah always do during times of great stress and worry, ah hid ma heid under the covers and hoped that it would go away. Did it F–k. They could, at least, have let me know they were the Polis, but they kept on battering the door and finally forced it open and ah thought this is it, ah’m deid. Instinctively, ah picked something up to face the enemy with, what ah was hoping to achieve wi’ a T shirt, ah’m no’ quite sure, and when ah opened the livin’ room door, a Polis man shouted oot ‘yer alive’. Ah didny even ken that ah was meant tae be deid. So that’s why ah needed a new door. Elton John like, ‘it’s a little bit funny’, but in the Five years ah’ve been in the flat the Polis have been here Twice for more or less the same thing. In 2015, the March, ah think, ah was awfy violently sick after finishin’ a night shift at B and Q and talk aboot projectile vomit, this was Supersonic. It was actually gettin’ worryin’, the volume of aw that sick. From around Eight in the morning till about Half one ah was either bein’ sick or wretchin, or waitin Five or Ten minutes to be sick or wretch. Anyway, ah didny go to work and didny phone and B and Q got worried and phoned the Polis. Ah still think that it was that day that triggered aw that Illness that followed over the course of the next Two or Three years.