A good pal paid me an unexpected visit earlier on and it was a great wee deviation from the mundane. Ah widny say  ah’ve got the ‘Black Dug’  at the moment – more like it’s wee Puppy that ah can give a quiet tellin’ off to make it go away. Anyway, ma pal was tellin’ me aboot a Telly programme wi that Simon Sebag Monty Python, or Montefiore, maybe, aboot the History of Spain. Ah learned where and how Tapas originated and it was fascinatin’. Aw ah know aboot Tapas is that it’s tiny wee amounts of lots of different Shitey tastin’ stuff. It’s just as well they’ve had some guid Fitba’- players over the last Twenty years or so in Spain – they’ve  needed  something special to take their mind off the food. Ah think ah’ve had it Twice, once should definitely be enough, but ah have a recollection of having it Twice.  We were also talkin ‘aboot Mossend Swifts and Mcrae’s Battallion. Ah think ah’ve got the spellin’ of his name wrong, but any Jam Tarts will tell ye that he, alone, won the First World War.  Ah’ve been tryin’ tae think of all the famous singers and groups from Pumphy over the years – and there are a few. Pumpherston Airplane,  Pumpherston Lake and Byprox, Bing Crosby[goes withoot sayin’ obviously]. ‘Goes withoot sayin’ could get ye intae trouble,though. If ye were in a discussion and somebody said ‘Einstein, that goes withoot sayin’, they’ve still said Einstein- and ye might get somebody who says ‘there’s an obvious name ye’ve no’ mentioned, to which , you or somebody else in the company wid say, ‘tell us who, then’. The other person might say, ‘naw’ ah’m no’ tellin’ ye’. Somebody else could chip in wi’ ‘Why the F–k no’, to which, the other wid say ‘Cos it’s obvious, ya daft Cunt. He might then say ‘ Who are you callin’ a daft C–t, ya C–t’ ?, to which, the others reply could be ‘that goes withoot sayin’, ya Cunt’. Then ye’ve got an argument because somebody didny state the obvious. Anyway, Byproxy Music is another auld Pumphy Band, ‘The Top park Mountain Dare Devils. Those are the famous names – others have almost been forgotten. the once famous Ella Fitzfella, the Drag Queen, who was huge in the Forties. There will be more on Ella and others at a later date. 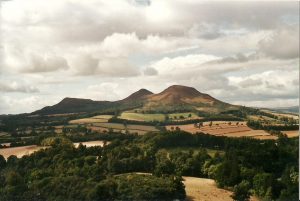