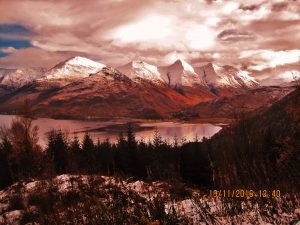 For anybody growin’ up in a wee Village in the 1970’s, the Big Yelly Van wid’ve been a common sight pickin’ up the Loonies and dafties of the day and takin’ them away tae the ‘special’ School for a day oot. Noo, they’re special needs or learnin’ difficulties people- are they bothered what we call them? -ah don’t think.  Anyway, away back in the day we aw’ probably knew people or were related tae people who were on the Bus, or should’ve been on the Bus. Pumphy was Loony Central- when the big Bus came intae the Village there wid be the driver and the dafty who liked tae sit beside the driver and wave at everybody and anything. Behind him wid be the Windie licker who’s tongue was at the top of the windie and who’s chin was at the bottom of the windie- and that was the passenger roll call. Four Hours later, when the Bus was leavin’ for the next Village for a pick up, the Bus resembled One of those Trains in India- there were folk sittin’ on the roof, hingin on tae the exhaust pipe, fightin’ each other other for a bit of Bumper. There was nae point in the Bus gaun anywhere else- the special School wid’ve been shut for the day by the time it left Pumphie. At least the Pumphy Posse and the other Two got a wee Bus journey oot it. Ah’ve no’ seen a big Yelly Van for years, although noo that ah’m back in Pumphy it might become a regular sight again. Ah sometimes envy those special needs people- tae be removed fae the ‘normal’ World and aw it’s woes and tae be removed fae yer own mind and aw it’s woes and worries wid be nice. Ah got up oot ma bed at Midnight( after a Sixteen Hour sleep) and ah felt wide awake, obviously. Ah had the last of ma Whisky( no’ opened the Uigeadail yet- that’ll get opened when Scotland qualify for the World Cup Finals or ah get a shag.