Into my heart an air that kills, from yon far country blows/what are those blue remembered hills, what spires what farms are those/that is the land of lost content, I see it shining plain/the happy highways where I went and cannot come again. That was from ‘A Shropshire lad’ by A E Houseman and it’s probably ma favourite poem.  It makes me think of days gone by and Childhood memories and sunny days and the branches of the Trees and the Barley swayin’ in the breeze. Ah canny speak for any other wee Shale mining Village but Pumphy had it’s fair share of what wid be called learnin’ disability folk, these days. Ah can remember the ‘Big Yelly van’ comin’ intae Pumphy= it wid be hard no’ tae remember it because it took aboot Two Oors for it tae pick up the folk in Harrysmuir alone. When the Bus came intae the scheme there was the driver and maybe Popeye the Sailor man behind him wavin’ tae everybody- by the time the bus got oot the scheme it looked like one of those Indian trains wi’ folk sittin’ on the roof and hingin’oan for dear life. That’s why they never got oot the bit– by the time the bus left Pumphy the special school was shut and they learned F–k all. In the wee scheme ah lived in there were a lot of families who never married but aw lived in the same Hoose, no’ the same Hoose, obviously. In the block of Four tae oor left there was a brother and Two sisters [ one of the sisters got on the Yelly bus] and next door upstair there was a mother and Four grown up sons [ the mother should’ve been on the Yelly van]. Next door tae us downstair there were Two brothers, the Whaler and Jimmy the Ghost [ who fertilised their Rhubarb wi’ their ain Shite. Ma mother used tae get Rhubarb from him until he told her what was makin’ it grow. Across the road fae us there were an old brother and Three sisters who all lived together, The man had a beautiful garden and one of the sisters wid be on her knees scrubbin’ the front door steps once a week. She reminded me of the auld wumman in Trumpton wi’ aw the Dugs and none of them got on the Yelly van. Next along fae them, Three brothers shared a Hoose, one of them had a Shotgun, one could possibly have been the only Gay in the Village when ah was  growin’ up and the other liked a bevvy tae the extent that he ran the Fitba’ team and the Fitba’ club almost single handedly intae the ground. Opposite them a sister and Two brothers lived in the same Hoose. That wasn’t even a quarter of the way round the scheme. 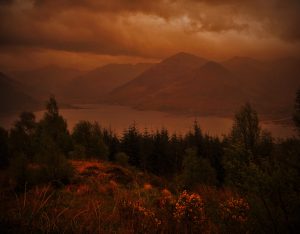