PUMPHY POND – Fair to middlin’ .  The perimeter path offers no real camouflage, ideal for the more adventurous Jobbier who couldny give a F–k if he, or she is spotted but not so good for the people who like tae hide their Shite under a Bushell. THE OOBY BAHOOGAN BURN . The Burn, named after an unfortunate villager who fell off a Tarzan rope into the Burn and swallowed some water, whereupon, over the next day or Two, his Baws ballooned to quite scary proportions. The Burn is a run off from the pond, which was a feature of the Pumpherston Works and latterly became a popular spot for unwanted Puppies and Kittens to, unsuccessfully, learn to swim, so drinkin’ it isny a great idea. As you head South along the Burn, the gradual slope offers the Jobbier some cover- and the view is delightful, but there is the chance that some tight erse will venture near your Shite site lookin’ for a Ball he’s just sclaffed in your direction. THE TARRY POND- far and away the best part of the Golf course for an outdoor Shite. It’s deemed a hazard and is fenced off on the grounds that the area is unstable and above old mine workings that could give way. It has luxuriant undergrowth and is  covered in Small trees and bushes. Ye’d actually have tae go lookin’ for somebody who was daein’ a Shite, tae see somebody daein’ a Shite. PADDY’S ACRE- The wee field which has a glorious view of the Coursing and Pentland Hills has been nominated Three times in the ‘Ootdoor Shit’ magazine for Best outdoor Shite Site in Scotland. Walkers and Tourists have harangued the local council into supplyin’ Bog roll for the site they were poo poo’d. THE HAIRY TIP -Ideal for the outdoor Jobbier with lots of gulleys and undulations and good tree covering. so good a place ye might find yersel daein’ a Shite next tae a Deer or Fox, who might be daein’ a Shite tae. THE AULD MINE SHAFT- was a great place until the new Pumphy village was built. This, too, has a fence around it and thick greenery all over. the Mine is totally hidden so it still is classed as a category 1 risky Shite. 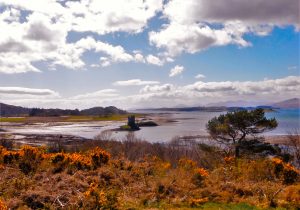